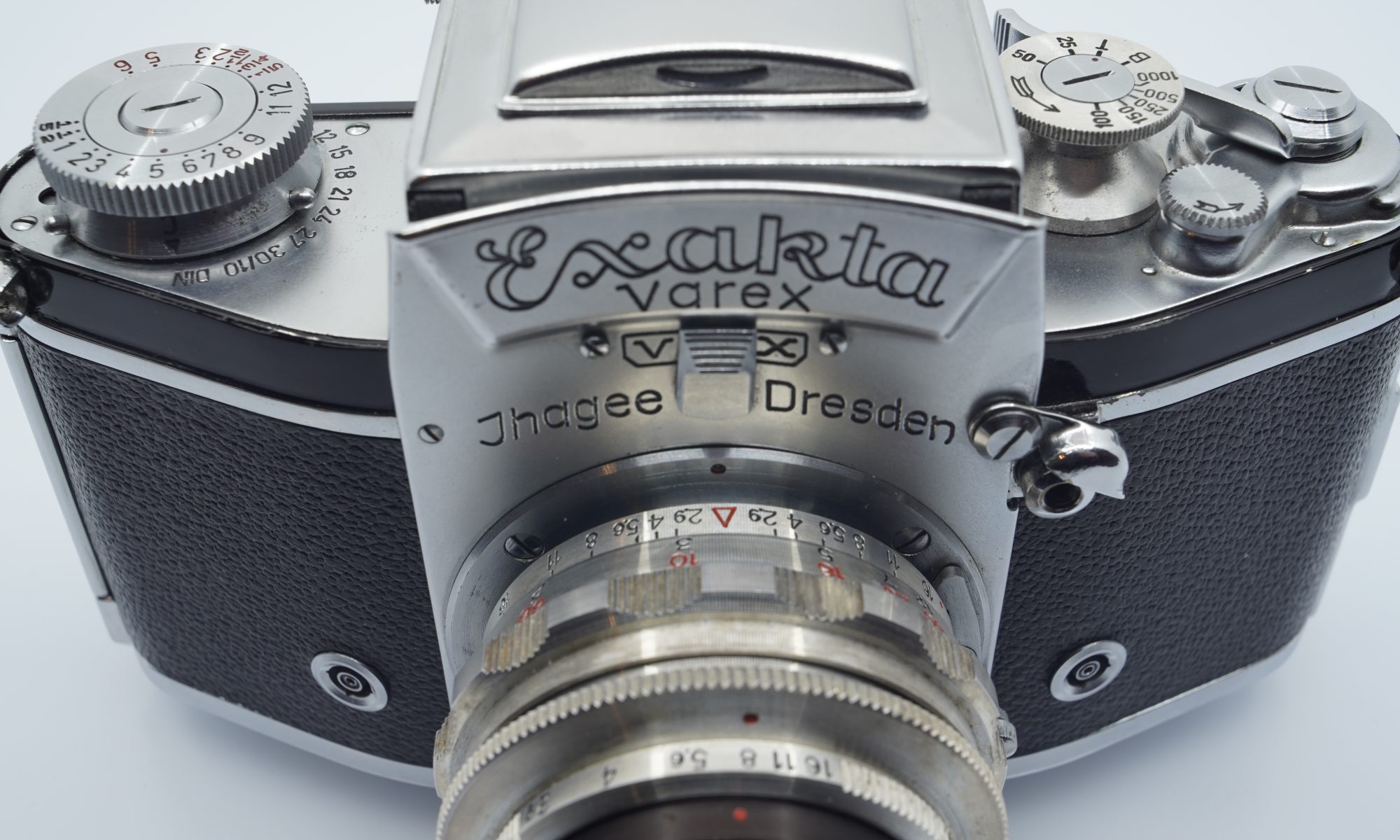 She is graceful, but also bombastic, but that is part of the real lady. The Exakta Varex VX is glitter, the former East German bling bling camera from 1956. At the same time ingeniously built and with a real optical viewfinder. Jimmy Stewart used it in the classic “Rear Window” movie by Alfred Hitchcock and also the Invasion ’68 in Prague was legendary captured by it.


The Exakta Varex VX is a popular vintage 35mm film camera because of its appearance. All the light reflects in the chrome appearance. Solidly built with large control buttons. It is a so-called waistfinder camera which means that you look into the viewfinder from above. To do this, open the viewfinder and open a prism flap above it so that you can look sharply through the lens. A precursor to the SLR, but the same principle. Focusing is therefore no problem with the huge viewfinder. It is however so that your horizon is mirrored. It is an oddity of the waist-level finder that the image is reversed left-to-right.  If you want to move the image to the right, you need to move the camera to the left.

You also only see the image when you advance your film. You can choose shutter speeds by pulling the button and choose one of the available times (from 1/1000 to 1/25 second). With the button on the right side you can also chooseven slower times up to 12 seconds and B. The right button also has the option of a self-timer. Under this button you can also set the ISO (as DIN) as a reminder. On the back there is not much to experience, but it does show how solid the camera is actually built. The large buttons on the bottom are meant as sturdy feet and at the same time you can use them to open the back by pulling out the left one (insert a film). But exactly the other way around as with other cameras (the film runs from left to right).

Inserting the film is easy. Make sure the film is properly inserted into the left takeup spool and passes in the sprockets. You can check a good transport by paying attention with advancing that the right button at the bottom of the camera rotates as well. Set the counter to 0 and start having fun. The shutter is placed on front next to the lens. It has a cute lock, a half moon that has to turn before the shutter can be released.

On this camera from 1956 a Meritar 2.9/50 lens from E. Ludwig is attached. But there is a whole bunch of cheap (and expensive) lenses available for the EXA mount, like Carl Zeiss Jena Tessar and Meyer-Optik Domiplans. The choice is yours. The build quality of this Meritar is reviewed good, sharpness, punchy colours and great bokeh make for a tremendous fun and cheap vintage lens. Here some examples made at the US War Cemetery in Margraten (Holland, 2020)

Here one of the most famous historic pictures made with the Exakta.